Journey into the undisturbed Japanese countryside on a bullet train, and you’ll soon forget the Tokyo skyline receding in the distance.

Vast, diverse and dotted with awe-inspiring landmarks, rural Japan drops traveller jaws year on year. But it’s not only Mt. Fuji that entrances visitors – from the northern wonderland of Hokkaido, to the subtropical islands south of Honshu, Japan is a gallery of inspirational Eastern vistas.

It’s well worth venturing beyond the usual suspects of Tokyo, Osaka, Kyoto and Mt. Fuji found on the main island of Honshu. To get a feel for the island-chain nature of Japan, try hopping over to at least one of the other three islands in the “big four”: Hokkaido, Kyushu or Shikoku. For those who want the full experience, you’ll be amply rewarded if you explore smaller islands like Okinawa and Naoshima. 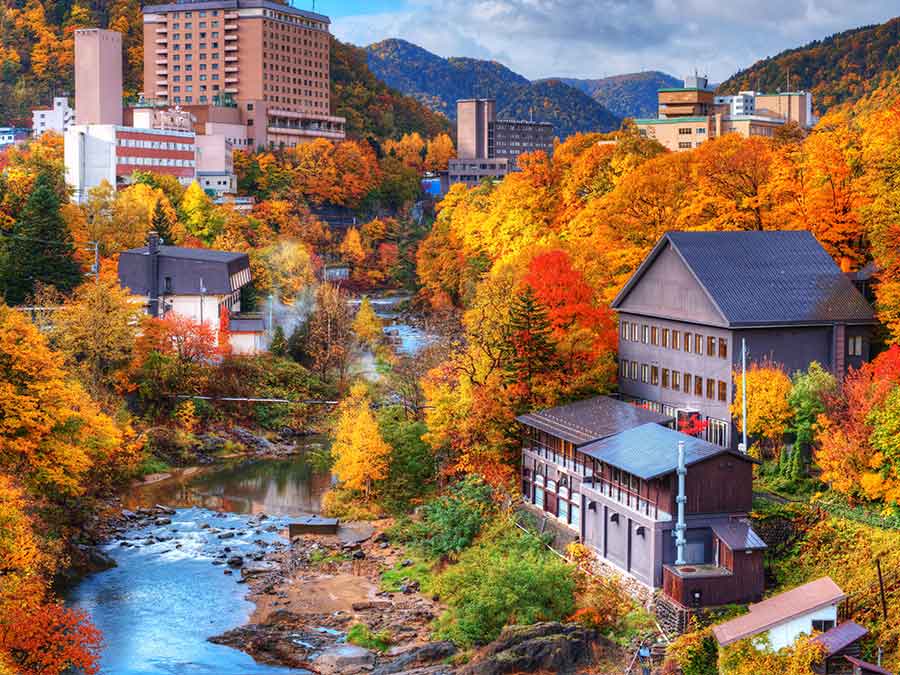 Hokkaido is the northernmost and second-largest of Japan’s islands. Famous for its scenery, the world-class skiing in the town of Niseko and Sapporo Beer, Hokkaido’s natural beauty can inspire even the most jaded of city dwellers.

Hokkaido is connected to the main island by an underwater railway line, the Seikan Tunnel. Getting to southern Hokkaido from Tokyo takes four hours by bullet train, however most travellers fly into the airport just south of Sapporo, the island’s capital.

Nature-lovers revel in the undisturbed Hokkaido landscapes, with camping and hiking popular in warmer months. And in winter, what better way to unwind after a day of outdoor indulgence, than in one of the region’s steaming hot springs (onsen)?

The famous volcanic park ‘Hell Valley’ in Noboribetsu offers the perfect respite from the northern chill, with its spectacular display of bubbling geysers and forest foot baths. 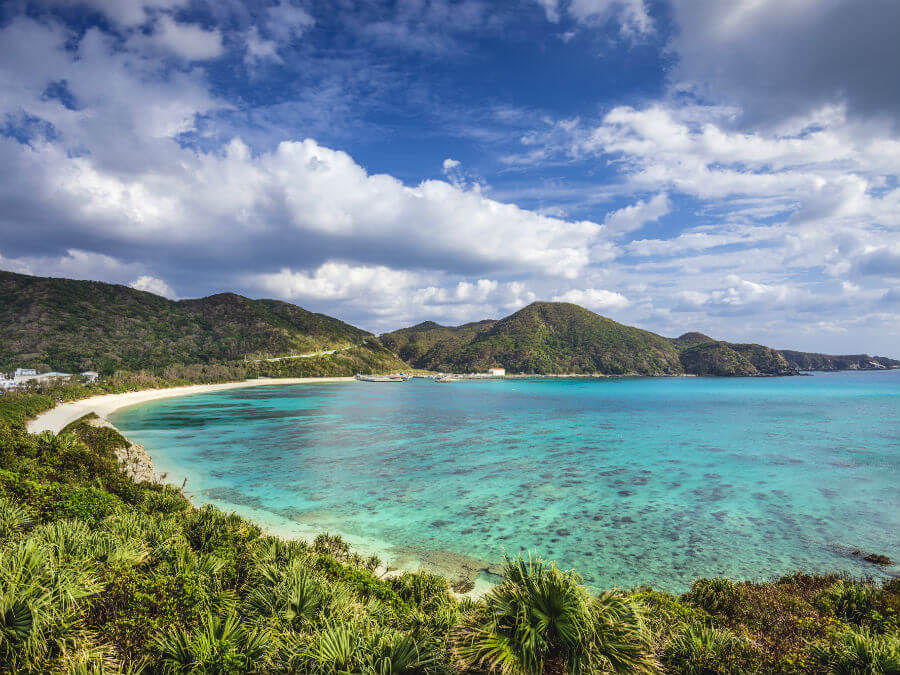 Japan’s Southwest Islands are a not-so-little slice of paradise, comprising hundreds of islands extending south of Kyushu for more than 1,000km towards Taiwan. The three main island chains are the Okinawa Islands (Okinawa is the largest), the Miyako Islands and the Yaeyama Islands.

Here, you’ll discover a completely different geography to the rest of Japan: desert island-style hideaways, coral reefs and pristine subtropical beaches. The islands are also distinct in Japan because they have their own native population, the Ryukyan people. While the Ryukyan languages are not commonly spoken these days, you will hear the Okinawan Japanese dialect used – another feature that makes this area so rare and remarkable. 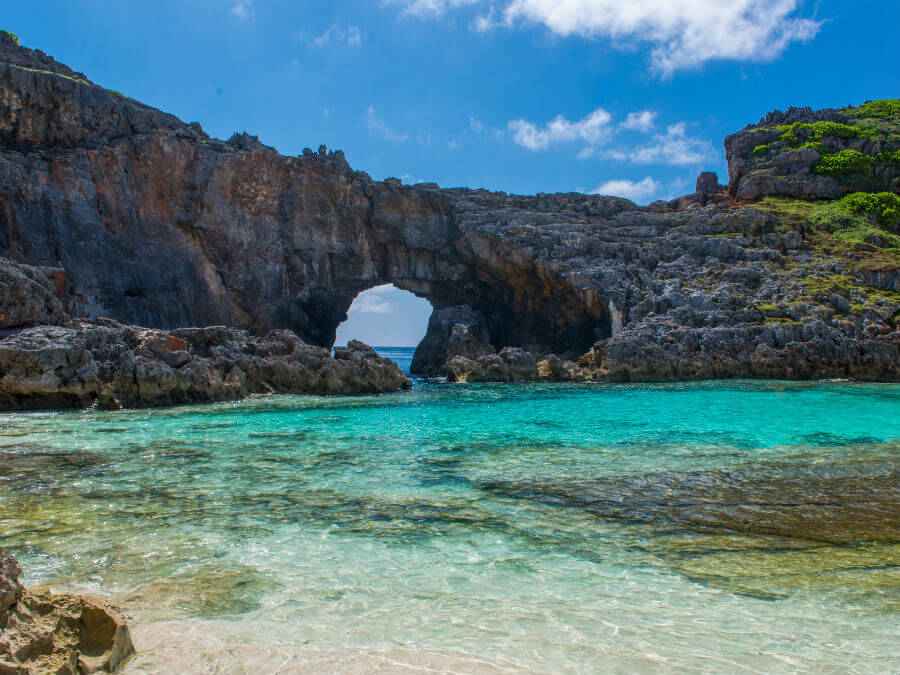 Travellers with an even keener sense of adventure will find a unique Japanese experience in the sub-tropical Ogasawara Islands. Also known as the Bonin Islands, this archipelago comprises over 30 individual islands with the kind of tropical beauty more akin to sailing the Caribbean. Diving, wildlife tours and even surfing will be the order of the day in this slice of sub-tropical heaven.

This recently-awarded UNESCO World Heritage Area has become a popular alternative to Japan’s better-known southern islands (like Okinawa). The name Bonin derives from the Japanese word ‘bunin’, meaning ‘uninhabited’, which isn’t far from the truth, even today. Just a few of its islands are populated, with Chichijima offering the only accommodation options for travellers.

Speaking of which, visitors should come prepared as credit card acceptance is virtually nil, as is currency exchange. Even getting to the Ogasawara Islands is an undertaking. Ferries depart from Tokyo Bay once a week, and the sea voyage takes 25-hours (in good weather). 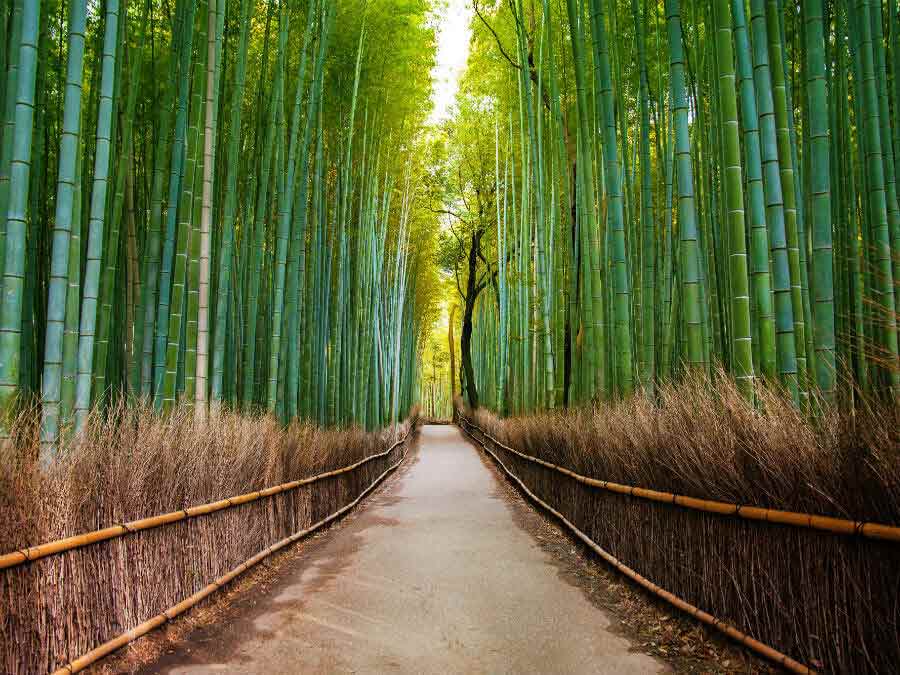 Gardens and groves of Kyoto

Another popular choice for travellers looking beyond Tokyo is the city of Kyoto in south-western Honshu.
Kyoto boasts natural wonders like the picturesque Arashiyama district – home to the Sagano Bamboo Forest. Rickshaws operated by enthusiastic locals are a great way to explore the forest. Traversing its meandering paths, the eerie creaking of towering bamboo is a surreal experience you won’t soon forget.

Travellers are also drawn to Arashiyama’s temples, charming streets and the Hozu River. Soak it all in from the Sagano Scenic Railway, also known as the Sagano Romantic Train.

If you’re feeling energetic, a brisk 30-minute hike up the mountainside will put you face-to-face with a tribe of native monkeys at Iwatayama Monkey Park. Get there for 9am when the park opens to avoid the crowds. You can even buy food at the park’s store to feed the monkeys. Although it is considered to be a very safe experience, it’s important to follow the park’s rules around interacting with the monkeys as this is not a zoo – these are wild animals in their natural habitat.

Japan is synonymous with breathtaking landscapes. Thankfully, the Japanese government recognises the importance of preserving their natural assets. There are 31 national parks across Japan and these cover all manner of terrain. Forests, marshes, coastlines, underwater marine sanctuaries and volcanoes litter the country – making Japan an explorer’s playground.

Three must-see parks for the nature-lovers among us include these three sites: 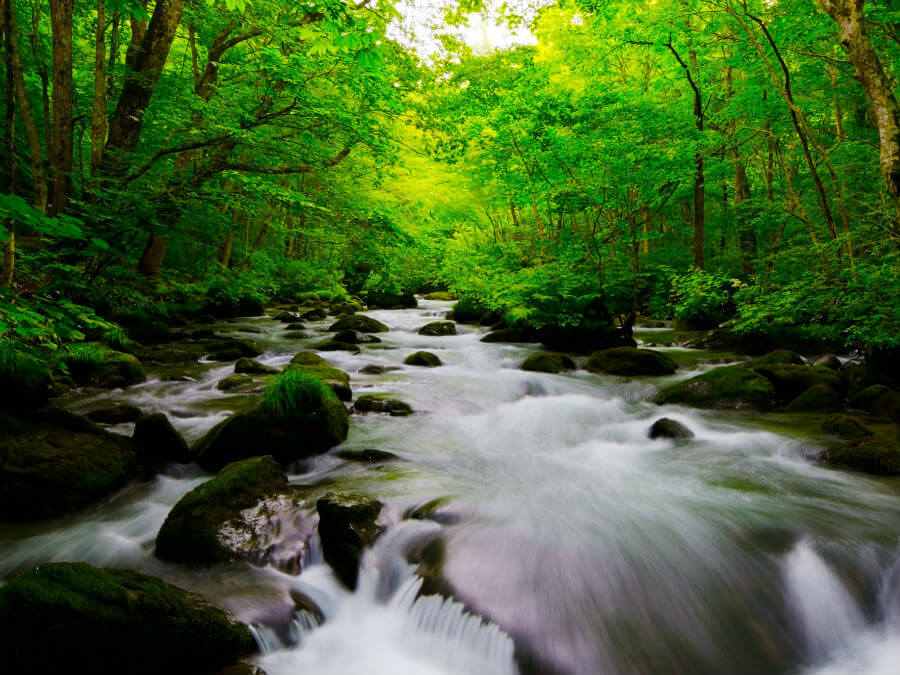 Not for the faint of heart, Towada Hachimantai National Park is nestled in Japan’s often-unforgiving northern climes. Infrastructure in the area essentially shuts down between November and April (when the severe winter-cold descends), but choose your season well and you’ll be dazzled by its mountainous beauty.

Towada is renowned for the stunning autumn colours that illuminate the Oirase Valley each year. Snap a photo from the popular hiking trail that fringes Lake Towada, and you may just have a new Facebook cover photo for the months to come. However, take note – Lake Towada is the deepest in Japan, and brutally cold, so make sure to leave the swimming costume at home. 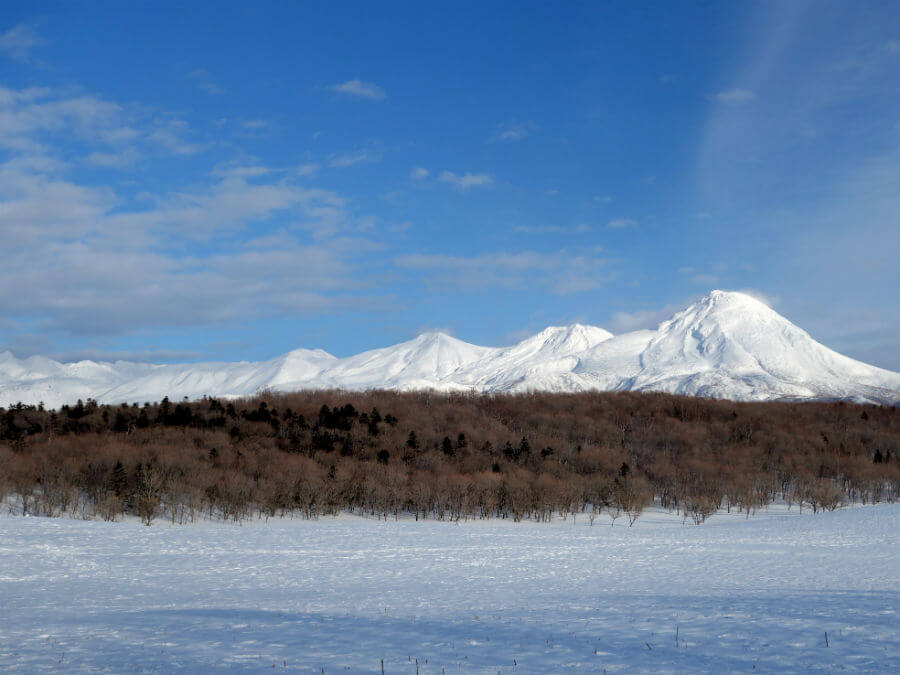 Also in the north of the country, the Shiretoko National Park on the island of Hokkaido is considered one of Japan’s most pristine, unspoiled environmental sanctuaries. The name ‘Shiretoko’ derives from an indigenous Ainu word meaning ‘end of the earth’.

The national park actually sits on the Shiretoko Peninsula in eastern Hokkaido, which juts out facing the icy waters off towards Russia. In fact, Shiretoko is known as the southernmost point where sea ice forms in the Northern Hemisphere.

One of the most popular ways to explore Shiretoko National Park is by boat, as all roads end about three-quarters of the way up the peninsula. Embark on a scenic cruise and you’ll marvel at the gargantuan snow-capped mountains, thundering waterfalls and wandering bands of brown bears along the riverbanks. 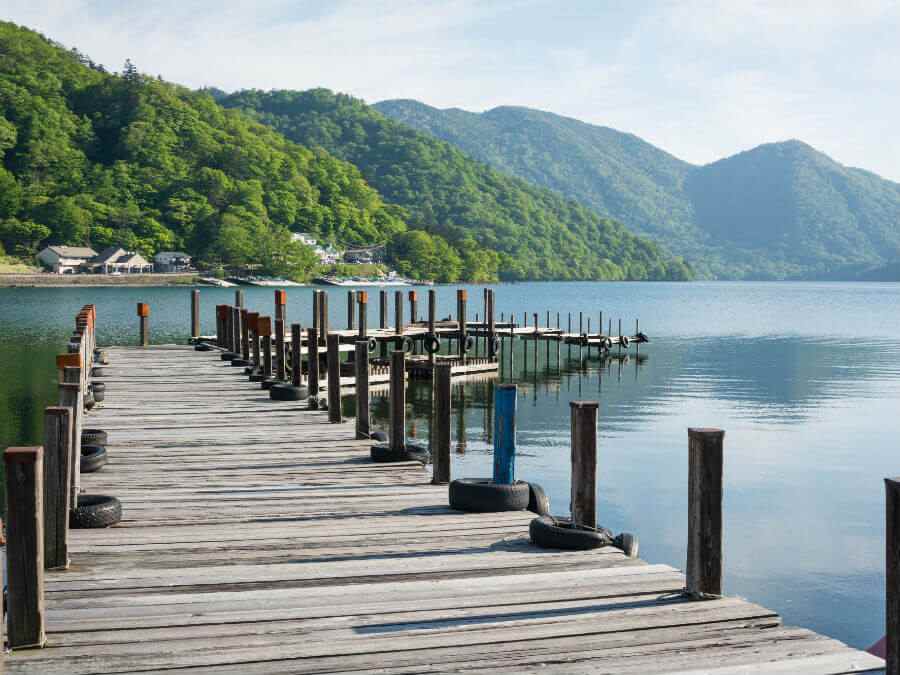 The Nikko National Park in the Kanto region is perhaps the most popular in Japan. It offers a quintessentially Japanese experience, with Buddhist and Shinto shrines, steaming hot springs and sweeping forests.

Nikko National Park houses the historic Toshogu Shrine, which is the opulently decorated mausoleum of Tokugawa Ieyasu, founder of the Tokugawa government. The shrine was first built in 1616, and expanded and restored to house the more than 40 buildings frequented today. The hushed forest backdrop of the Toshogu Shrine makes it one of the most tranquil in the country.

Nikko National Park is best reached by train. Departing from Tokyo, a bullet train will take you around two hours, making a day trip to the park a popular escape from the hustle and bustle of city life.

What discussion of Japan’s stunning natural beauty would be complete without a mention of its snow-capped volcanic peaks? The towering mountains are as much a part of modern Japan as the busy inner-city intersections. 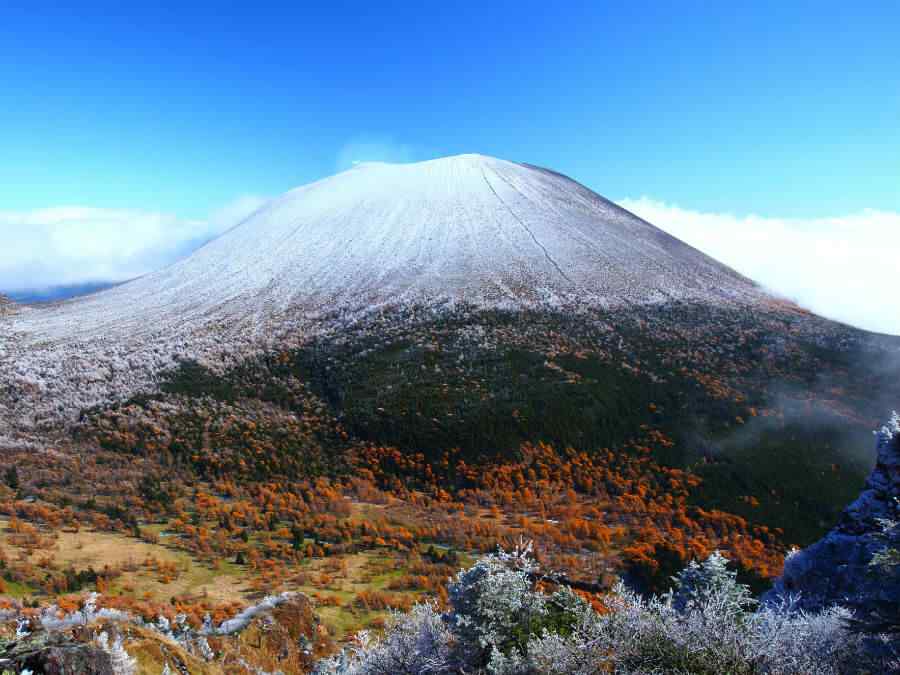 Mt. Asama is the most active volcano on Japan’s main island, Honshu, and experiences regular small tremors and eruptions. In 2009, Mt. Asama roared to life in spectacular fashion, with ash-fall reported as far as 150kms away in Tokyo.

The surrounding Karuizawa resort town is a great summer escape from the stifling Tokyo heat, but the temperamental Mt. Asama is officially off-limits to would-be hikers. Although some adventurers disobey this order, the volatile volcano is definitely best appreciated from afar. 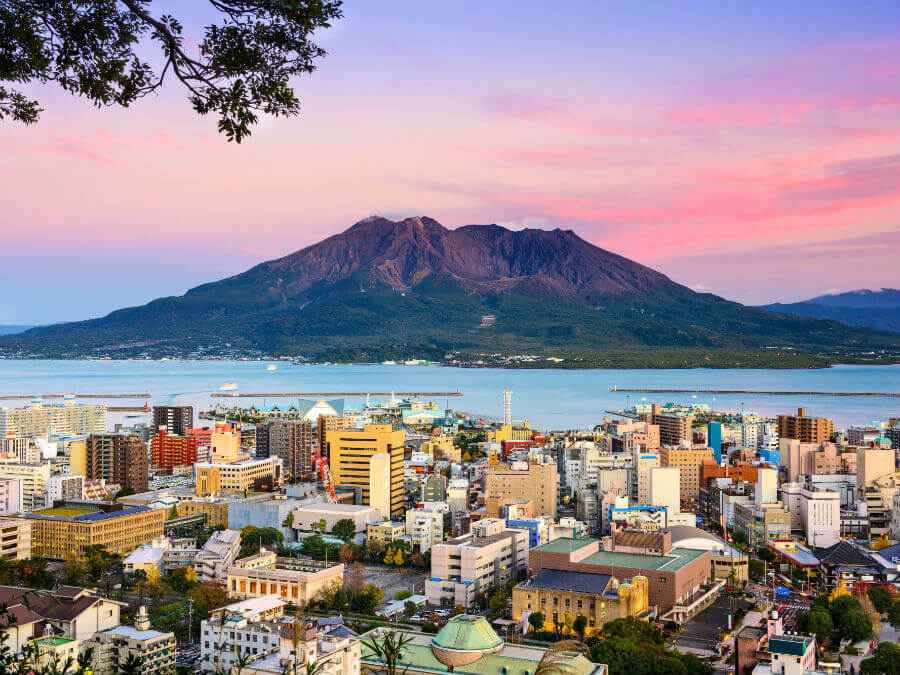 Like Mt. Asama, Sakurajima is kept under close watch because of its regular rumbles. Unfortunately for the town of Kagoshima at the foothills of the behemoth, this means ash baths aren’t entirely uncommon.

For tourists, Sakurajima can be the best chance to witness the spectacle of skyrocketing plumes of volcanic ash. Locals casually going about their days, apparently unfazed by the apocalyptic vision behind them, is a sight to see.

Yunohira Lookout is a scenic two-hour hike from town, and is an ideal spot to witness the smoke which constantly rises from the volcano, as well as offering beautiful panoramic views of Kagoshima City. 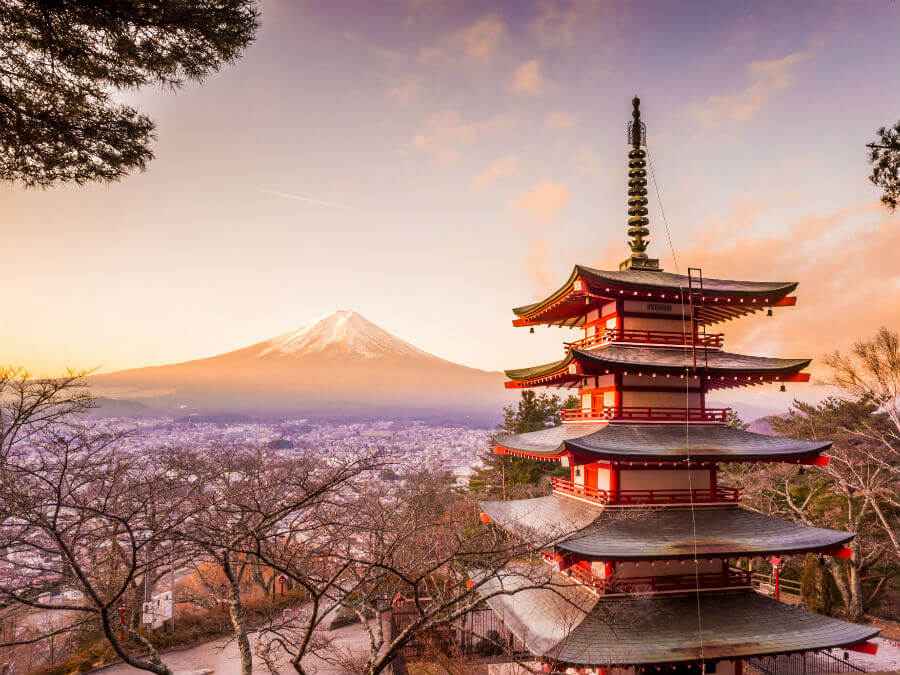 Mt. Fuji is Japan’s most recognisable natural landmark and historic muse for countless artists throughout the centuries. The highest mountain peak in Japan lies just two hours from Tokyo – and can even be seen from the city on a clear day. But it’s not just proximity that makes Mt. Fuji the crowning jewel of Japan’s impressive suite of national valuables.

Keen climbers stride up the mountainside by the thousands, with the summer months of July through August being most popular. So prevailing is the hike up the mountain that there’s a post office at its summit.

For those looking for a less strenuous day out, there are regular cable cars to the Fuji Viewing Platform in the Tenjo-Yama Park.

Modern Japan may have its eyes set firmly on the future, with innovative technology, an ever-expanding city skyline and flourishing culture at its core.

Nevertheless, Japan’s world-renowned coastlines, forests, valleys and peaks have captivated travellers through the ages, patiently awaiting a new legion of adventurers to excite and inspire.

Will you be one of them?